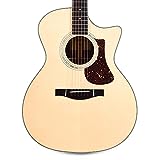 Eastman is one of those sneaky brands that is quietly making an excellent guitar for a fraction of the cost charged by big name brands. The materials, in general, are the same or similar to what you would find on a guitar that is twice the price. The AC422ce has these key components that contribute to tone covered:

Here how the guitar stacked up when checking out the guitar at a local store:

This guitar is a good value when compared to instruments with similar features from what I call the big three (Taylor, Gibson, Martin). In general, the price of this model is in the 1000-1200 range.

In playing the guitar next to Gibson and Martin models with similar woods the tone was very impressive. In some cases, it surpassed the more well-known brands. The tone was what you would expect from the East Indian Rosewood/Sitka Spruce combination. It was balanced with shimmering high’s and a solid base tone.

In playing the guitar some of the fretwork was a little rough, there were some sharp edges and some high spots on a couple of the frets. None of this seems to affect the tone of the guitar. The broad stripes in the East Indian rosewood are striking as is the finish on the back of the neck. It is not noticeable from a distance but if you look at the binding closely you can see the seams where the ends join on a diagonal cut.

This is where the guitar shines it sounds so good when playing you can’t put it down. It was surprising to me that even with the few sharp edges on the fret ends you didn’t really notice after playing for a while. I’ve had several friends over that have played the guitar and they too were surprised by the playability of the guitar. The action and neck setup was just right. Because the neck has a thicker feel to it, there will be some that don’t like the feel of the neck. For example, if you prefer the thin tapered necks you may not enjoy playing this guitar as much. The tone may hook you though…

If the guitar has a weakness, this is where I felt it fell short. While pedals and other gadgetry can fix it the tone of the amplified sound, I feel that straight up out of the box this setup was a little thin. As a result, amplification didn’t seem to capture the wonderful sound that the guitar has.

Interested in other Eastman Guitars? Eastman has many quality models of guitars. Check out our Top 5 Eastman Acoustic Guitars article to learn more about our favorite Eastman models.