A ukulele is a small hand-held instrument that is sometimes confused with a small scale guitar.
Interestingly a banjo is actually a type of ukulele even though most people think it is a separate instrument. The confusion is because banjo ukulele is commonly referred to by the term “banjo”.

The phrase types of ukulele will usually refer to the size of the instrument. Ukuleles are usually categorized by their size, not characteristics.

There are four primary sizes of ukulele, each of which has a different name. The names refer to the common types of ukulele, as well as the sizes.

Luckily, most ukuleles share the same characteristics, which makes it easy for people to play common varieties of the instrument. Therefore, most ukulele songs can be played on most ukuleles.

This means if you learn to play one kind of ukulele you should be able to use them all. Here is a handy list to help you identify the common types of ukulele.

This is the biggest common ukulele; it is usually around 30 inches (76.2 centimeters) in length. A Baritone ukulele is easy to recognize and play because of its larger size and 19 or more frets.

The Baritone is popular because it produces the same sound as the four strings of an acoustic guitar. It is a little different because of lower-pitched tuning. That produces notes of D-G-B-E which is the same as the 1st, 2nd, 3rd, and 4th strings on the guitar.
Generally, Baritones are best for experienced players because of their unusual tuning. They can be fun to play, especially for those who have had some experience with guitars.

Baritone ukuleles are often used in the blues and country ukulele songs. They are often the favored instruments of the pros. 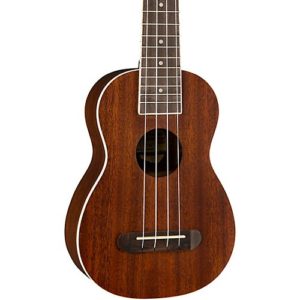 The smallest common ukulele is the Soprano which is usually around 21-inches (53.54-centimeters) in length. The Soprano can be readily identified because of its 12 to 15 frets and thin, jangly sound.

Due to the scale and small size care must be taken when playing a Soprano ukulele as it is easy to bend strings out of tune. For this reason, guitar players often have a hard time adjusting to a Soprano ukulele. 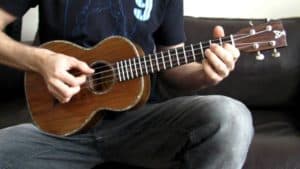 The Concert or Alto ukulele is popular because it has slightly fuller sound than the soprano. You can recognize the Concert ukulele because of its 23-inch (58.42-centimeter) length and 15 to 20 frets.

There are two popular ways of tuning the Concert and Soprano ukuleles; linear and re-entrant. Both are tuned in a GCEA pattern. Linear produces a lower sound, and re-entrant a deeper sound. 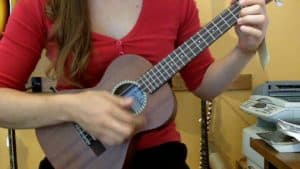 The Tenor ukulele’s size is halfway between the Baritone and the Concert ukulele. A Tenor is usually around 26-inches (66.04-centimeters) in length and has 15 or more frets.

Like the Baritone, the Tenor ukulele produces a richer and fuller sound. A lot of performers like it for this reason, and the ease of reaching higher notes on the fretboard.

The many different types of Ukuleles

The four varieties described here are the tip of the iceberg when it comes to ukuleles. There are many other kinds of ukuleles on the market and many different ukulele brands.

For the truly adventurous there are Cigar Box and other homemade ukuleles which are often sold online. Cigar Box ukuleles are usually made from an old-fashioned cigar box.

If you really want to learn about ukuleles go to YouTube. You can find lots of great ukulele songs there and demonstrations of a lot of terrific playing.