Martin guitars have long been the standard by which others are measured. The staple of the Martin standard series is the Martin D28 model. Its classic Martin dreadnought shape provided a good volume and its quality materials provide a guitar that is easy to play with exceptional tone. There are a couple of items that changed on the 2017 model but in general it’s the same guitar that others continue to model after. Here are a couple of features that changed for 2017:

Here how the Martin Acoustic D28 guitar stacked up when checking out the guitar at a local store:

At first glance this guitar is expensive. However, if you look at what a used Martin D28 guitar sells for, they tend to hold their value. So when looking at this guitar I try to think of what its value will be five years from now. For example if you paid $2700 for a new D28, if you look at average prices of used Martin D28 acoustic guitars for sale you’ll see them between $1700-$2100. So if you were to hold the guitar for 5 hears you may find the guitar only really cost you ~$1000 to play for 5 years. But most people fall in love with the tone and quality of this guitar and will likely never want to sell it, unless you need the cash..

In playing the guitar next to Gibson and Taylor models with similar woods the tone was deep and rich. Martin guitars in general have a little darker tone and the Martin D28 is no exception. Chords in the first 3-5 frets are deep and have a nice boom, chords in the upper frets are smooth rich. The forward shifted braces which are new, did seem to make the guitar sound a slightly brighter than some of the older Martin D28’s I’ve played this may also be attributed to the “Age Toner Top” which basically is wood that has been modified to sound like an older guitar.

The particular guitar I was playing had a perfect setup for me, I was able to play bluegrass riffs and chords with no buzz and also perform fretting in 8th -12th with no string buzz. It’s possible the tech could have lowered the action for me but it seemed pretty close out of the box. I may be a little bias toward the martin neck it’s my favorite of all the brands.

The standard D28 holds up to heavy flat picking and is well suited for bluegrass. If you prefer finger picking you may also want to look at our Martin HD28 article. Scalloped bracing tends to be little more responsive to the lighter touch of finger picking.

The frets were smooth, the feel of the neck was just right it feels like Martin goes really light on the varnish for the neck so your hand slides easier when playing. The vintage nickel tuners are a nice touch and are usually a feature only found in the vintage models at a higher price tag. I have mixed feelings on the tortoise pick guard it’s always been black for the D28 and the tortoise was used on the HD version. It has no effect on the tone it’s just a personal preference of mine. The East Indian rosewood back and sides are beautifully polished and the zig-zag inlay on the back is simple but a nice touch.

The Martin standard D28 doesn’t come with electronics however it should be noted that you can order one with electronics or you can get a sound-hole pickup if you don’t want to risk affecting the beautiful tone of this guitar. 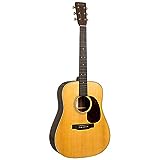