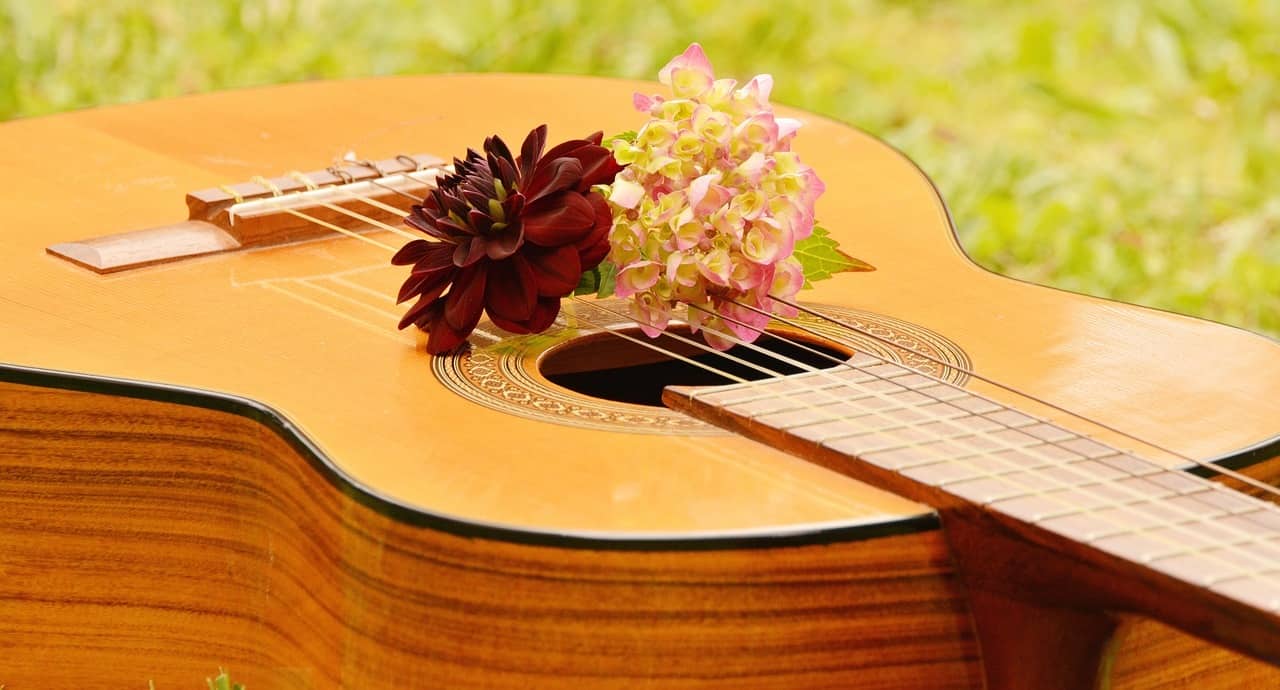 I like to break acoustic guitars down into several types of guitars. Small Body, Resonator, Steel String, Classical, Flamenco, and Travel guitars. While there are a variety of guitar types and shapes, these seven categories seem to cover most types of acoustic guitars for my purposes. Musicians are a quirky and creative bunch, so it only stands to reason there would be many choices for them to chose from when selecting a guitar.

What is different about an Acoustic Guitar vs. Electric Guitar?

Guitar shapes have evolved through the years, and more so than an electric guitar, an acoustic guitar’s sound derives its tone and sound from the shape of its body or sound box. The shape is vital because the box amplifies the sound. Acoustic Guitar body shapes determine the sound by projecting the music in different ways. For example, a jumbo shaped acoustic guitar will have much more volume than say an auditorium body shape. The best acoustic guitar songs are ones where the artist took advantage strength of a particular body style to compliment the melody and feel of the song.

The best acoustic guitar players pick their instruments carefully to suit the style of music they perform. Good knowledge of guitar shapes and how tone they produce is can compliment a guitarist picking style as well as provide more comfort when playing.

Here is a short rundown of acoustic guitar types to help you in your search for your instrument.

When I think of a small-bodied guitar, I think of the Parlor guitars that were famous in the early 1900’s and recently enjoyed a resurgence in popularity. They don’t provide a big sound volume and have a shorter scale length, but are ideal for playing in intimate settings. If you’re looking for a deep full sound, you probably should look at some of the other types of acoustic guitar.

Steel string guitars as a category is a broad topic when you walk into your favorite guitar shop and see the wall of acoustic guitars, the majority of them will be steel string unless it’s a shop that specializes in classical guitars. At its core, a basic steel string guitar typically has a slightly curved fretboard, a narrower neck, a hollow wood body and spruce soundboard (also mahogany and other wood varieties are becoming more common). Really when picking a steel string guitar, the shape is one of the determining factors and helps differentiate the choices in this type of acoustic guitar. Let’s take a look at some of the typical shapes you find:

The dreadnought body shape is the most popular and common type of acoustic guitar today. Named after battleships; or dreadnoughts, used in World War I, because of their big and bold sound. A Dreadnought guitar shape has broad shoulders and a large internal cavity that produces a booming sound that is perfect for Bluegrass, folk and Country music.

Due to its larger internal cavity, the Jumbo shape produces the biggest and boldest sound of all the acoustic guitars. The midranges and treble sound come through with a little more volume than the dreadnought shape which is known for it prominent bass.

Jumbo guitars have been popular with some of the greatest acoustic guitar players including John Denver, Elvis Presley, and George Harrison. Gibson Guitars famous J-200 guitar is known and the “king” of acoustic guitars due to its big sound, ornate appointments and use by famous artists.

Many guitarists like the Auditorium because it fits snugly on their legs. The snug fit comes from the refined or smaller waist. The snug fit comes from a smaller sound box. Despite its smaller size, this shape produces large enough volume to play in almost any setting. It’s a ‘jack of all trades’ guitar shape, and I think this is what has made it so popular. Eric Clapton put the Martins triple-O on the map when he used it to perform on his unplugged album.

Sloped Or Round Shoulder Dreadnought

Gibson’s variant of the Dreadnought, the sloped or round shoulder dreadnought is almost as popular as the original. The most popular round shoulder dreadnought – the Gibson J-45 offers a warm and luscious sound. This tone sound is perfect for pop music which explains part of the J-45’s appeal. The most famous J-45 guitarist was John Lennon. Lennon customized his instrument with a single-coil pickup and volume knobs similar to those on electric guitars.

These slope shoulder guitars are perfect for songwriter/guitarists and songwriting. The sound they produce complements the human voice rather than overpower.

Resonator guitars are an acoustic guitar that has a large hole cut out and has a metal plate installed. It also has one or two ‘cones’ to project the sound rather than the guitar top. Its very distinctive sound is popular with country and blues songs. Typically guitarists use a metal slide rather than fretting, and finger picks to pluck out the notes. The strings also are set with a higher than normal action to allow the sound to resonate as well as minimize buzzing. The resonator guitar is also known as a “Dobro” guitar which is Gibson’s brand name for a Resonator guitar. Read this article for more information on their Dobro guitar.

While many people may not know what a resonator guitar looks like, I think most heard one without really thinking about it. This youtube video gives a quick look at a Resonator guitar in action.

Classical Guitars are instruments designed from older musical traditions. The key differences are the wider neck, the flat board, and the typical guitar top uses cedar rather than a spruce top. A well-made classical guitar is articulate and has a warm, sweet tone. The name Classical comes from its use by classical guitarists like Francis Tarrega or Fernando Sor. Its softer tones fit in perfectly with an orchestra or string quartet is also great for solo guitar efforts. You can easily identify a classical guitar by its open slotted tuners. Classical guitar tuners are cams instead of standard tuner posts.

The Flamenco guitar is very similar to the Classical guitar at first glance. But at when you look a little closer, subtle differences appear that give it its distinctive sound. The Flamenco guitar typically has a cypress wood top, and originally the whole guitar was made of cypress. The other difference is sparse bracing and a thinner soundboard on the top giving the guitar a brighter sound with more volume. The Flamenco style also using a lot of soundboard tapping requiring the strings to be closer to the soundboard.
Check out this video of famous flamenco guitarist Carlos Montoya to get a sense of what a Flamenco guitar is:

Travel guitars have become popular because they allow the guitarist to practice in places where it was typically impractical to bring a guitar. Paramount to a good quality travel guitar is a neck that is to scale of a full-sized guitar. A standard-sized fingerboard allows the player to practice on a neck that is similar to a standard sized guitar. Don’t focus so much on the tone and sound of the guitar when looking at travel guitars; the focus should instead be on the craftsmanship and construction. Martin makes a great travel guitar that is handy to take along backpacking, bicycling, or carrying on the plane.